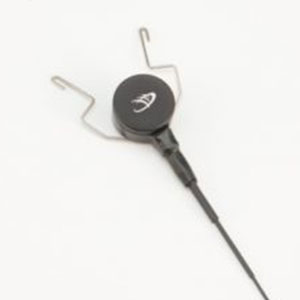 The PowerMax is a higher power transmitter running on the frequencies of 173, 216 and 218 MHz. These frequencies require a receiver to match, which are also now available from Marshall Radio.

THE IDEAL BACKPACK MOUNT
The PowerMax is the ideal transmitter for the backpack mounting method using the TrackPack because of it’s shape and size. Its exceptional power output makes it the right choice as a primary transmitter while the flat coin-shaped case keeps a very low profile on the back of the bird. The nine-inch long antenna does not extend past the tail.

The BackPack method allows a bird to carry a larger transmitter than would be reasonable on the leg or tail, yet the PowerMax weighs the same as the RT Plus leg mount. But even a light transmitter should not sit high or extend high above the back for obvious safety reasons.

TAIL MOUNT ON LARGER BIRDS
The PowerMax is also well designed to be a flat, tail hugging tail mount where a nine-inch long antenna will not extend more than a few inches beyond the deck feathers. With a total weight of 8.9 grams (including battery), it would be recommended for the larger birds  (female peregrine and up) only.

With the Magnetic On/Off switch, batteries can be left inside the transmitters, until they need to be changed. To turn it on, you simply hold the magnet to the lid or body of the transmitter until you hear three rapid beeps, which tells you the transmitter is on and running. You do the same thing again to turn it back off. If the magnet is lost, the transmitter can still be turned on and off manually as before.

After accumulating approximately 60 hours of actual run time, the normal single beep of the transmitter changes to a double beep every tenth pulse, letting you know that it’s time to change the battery. Even though a transmitter switches to Low Battery Mode,  there’s still five days of back-up time left to look for a lost bird. The transmitter runs at the same power levels but it simply warning you to change the battery. It will also warn you if you put in a weak battery.

You should get into the habit of changing the battery every time you hear the double-beep. If you were to fly your bird right before the double beep warning began, and the bird became lost, you would have about five days or so to search for it. If you continue using the transmitter into the Low Battery Mode, you will have an uncertain amount of time (much less) to look for it and will be at risk of not knowing, guessing at the amount of run-time left as with older designs still in use.

To clear the memory of the internal timer when a new battery is installed, you can put it in backward for a moment (positive side facing transmitter) which will short out the two electrical connections, and then put the new battery back in normally. This instantly dissipates the remaining charge left in the transmitter and resets the timer. Using the upside down battery to do this makes it simple. The timer will also automatically reset (remaining charge in the transmitter will dissipate to zero) if you remove the battery and let the transmitter just sit empty for 10 minutes.

This unique feature gives you the most time to find a lost bird. If the PowerMax is not turned off for 16 continuous hours, it figures your bird is probably lost and takes actions to conserve battery life with shorter and less frequent pulses. Under normal use at high power and regular duty cycles, a new battery should provide about 7-9 days total time. If you lose your bird with a fresh battery, the Apollo 13 Mode will double the normal life of the battery.

The antennas on all Marshall transmitters have been carefully tuned to the optimum length. If an antenna is cut down (significantly) from the length it was sent with as standard, drastic loss of range can occur.  Significant shortening of an antenna may also cause other unintended side effects, so it is not recommended.

ABILITY TO FLY IN COLD TEMPERATURES

If you are planning to fly in very cold conditions where a bird may become lost overnight, you should always use a new battery. As coin cell batteries run through their life cycle, they lose some of their ability to provide current to run the transmitter in very cold temps. While the CR1632 battery will work at truly arctic temperatures for the first 36 hours of its life, after 72 hours it may not operate below -20C (0F) and subsequently will require even warmer temperatures.

There is a 30-Day Satisfaction guarantee which means you can return it in like-new condition for any reason. After that, the three year Warranty covers defects in both workmanship and materials and we will repair or replace it and return it to you free of charge. We work to be both generous and reasonable with Non-Warranty situations as well.

One thing to remember is that using a non-Marshall replacement antenna will void the Warranty.