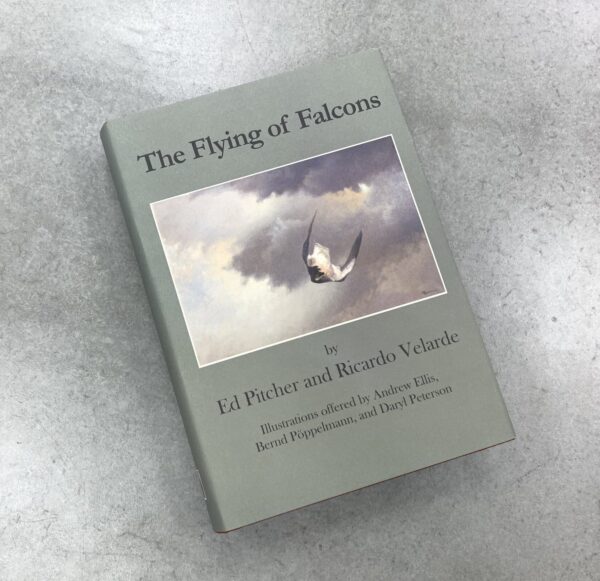 Book: The Flying of Falcons

This is the new American Falconry book that’s causing falconers to re-think their art, worldwide. And getting enthusiastic praise. Once you have a chance to hold it in your hands and read it, you will know why. Following a young falcon’s developmental sequence, Ed explains why he strives to allow his birds to progress through the natural stages in order to develop the confidence, initiative and abilities nature intended, without the falconer getting in the way. The result is a captive-reared falcon with the “wild mind set” that flies and behaves and succeeds more like it’s wild counterpart.

“1969 changed my life; it is still changing my life. I watched a young prairie falcon land on a lure, a dead pigeon in fact. The falcon was out to hack. She was not tame but she would tolerate the falconer and me without notice. Something awakened in me. I couldn’t take my eyes off this falcon. Every feather, every move, everything about this bird captivated me. My life was changing right then. I was to become a falconer.

Unable to pinpoint the origins of my basic philosophy towards falconry, I has early on accepted the belief that any raptor brought in to my hand, should do no worse than if left to its own devices. My hope was to fly these magnificent birds, as they were described in the litereature; not just in falconry literature but also in the works of naturalists, egg collectors, and the fans of peregrinesaroundthe world.

My favorite piece in the following from The Hawks of North America:

“The Peregrine Falcon is perhaps the most highly specialized and superlatively well-developed flying organism on our planet today, combining to a marvelous degree the highest powers of speed and aerial adroitness with massive, war-like strength. A powerful, wild, majestic, independent bird, living on the choicest of clean, carnal food, plucked fresh from the air or the surface of the waters, rearing its young in the nooks of dangerous mountain cliffs, claiming all the atmosphere as its domain, and fearing neither beast that walks nor bird that flies, it is the very embodiment of noble rapacity and lonely freedom. It has its legitimate an important place in the great scheme of things, and by its extinction, if that should ever come, the whole world would be impoverished and dulled.”

If the falcons I fly don’t take dominion of the atmosphere, if they don’t claim the sky and fly with the boldness of ownership, I look to myself with guilt. I feel that I have robbed the bird of its natural talents. I have failed myself in not realizing my own goals and the commitment I had made to the falcons.

I see each hawk I’ve flown as an opportunity to witness its singular talent and finesse. Every falcon, given the opportunity to develop its own talents, surpasses my ability to train it. Every falcon that I have ‘trained’ has been diminished. My interference with the falcon’s natural development, by using a rigid training program, has only led to mediocre flights of limited space, time and intent.”

Ed Pitcher is a Biologist, who recently retired from a long career in Nursing. He and his wife Barabra now reside near Malad, Idaho, in a home in the hills powered entirely by wind and solar, on enough acres that he puts out a young group of peregrines to hack each year.

“I have been involved in falconry for close to forty years. Ed Pitcher and I met at the Alamosa falconry meet in 1978. One of the many great stories in this book and I use it to introduce Ed Pitcher on this webpage and in the book.

After becoming great friends and flying falcons together, I knew Ed had a very unique way of managing his falcons, and the idea to writing a book emerged. Twenty five years later it became a reality..”

Ricardo Velarde was born in Mexico City in 1957, the second child of five brothers. Involved in sports from a very young age, he was a springboard and platform diver for many years. While in High School, a friend showed him a falconry book that caught his imagination, and soon after, he started working as a craftsman, making falconry equipment.

Later on he was recruited to compete as a diver for Brigam Young University in Provo Utah, where he met several great falconers of the time who helped him get more involved in the sport, including Gerald Richards who came up with the idea of the Sky Trials, which has now become a world known event. When Ricardo moved to Reno, Nevada, to work on a falcon-breeding project with Dave Jamieson, he also acquired the Pete Asborno bell-making business. At a small coffee shop there, he met the owner who later became his wife, and has always been very supportive of his Falconry and Sports haabits.

Many years later, they moved to Park City, Utah where he fell in love with his new therapy sport, short track speed skating. Another hobby of his, knife making, has turned into a way to make a living, and his knives are now in demand all over the world. Finishing this book, after so many years, accomplishes another objective in Ricardo’s interesting and rich life.

“It is with fond recollection that I remember back to an afternoon visit with Ed Pitcher. I listened awestruck as he recounted experiences he had with many of the falcons he had flown. When asked by Ricardo to contribute to this new volume, I did not hesitate. Ed’s unique viewpoint and freethinking approach towards training falcons has become for me a breath of fresh air. It has been a great honor to be involved with both Ricardo and Ed on this book. I hope you take from it as much inspiration as I and many others will.”

Andrew Ellis’ artwork is highly regarded in the falconry world. His depictions of hawks, eagles and falcons adorn the walls of falconers the world over. A falconer himself, he has spent many hours in the field, working with birds of prey, primarily falcons and particularly his beloved peregrines.

Andrew’s passion for painting the natural world was revealed at an early age. Growing up in rural Devon, he was drawn to studying wildlife. He continues to live in the southwest, with his wife Donna, and their two children, and is still very much inspired by the surrounding wildlife.

Whilst studying at Exeter College of Art and Design (1987-89), he won a British Association Shooting and Conservation competition, and also secured his first contract to illustrate Ranulf Raynor’s “The story of the sporting gun.”

Andrew’s work has been featured in many falconry, shooting and wildlife publications; his work is collected worldwide and he has exhibited as far afield as the Middle East, America and Europe. Andrew’s artwork captures the best of the beauty of wildlife in its natural habitat, and he manages to capture the moment that he is portraying perfectly, which is only possible when the artist is truly passionate about his craft and his subject matter.

“When Ricardo first called and asked me if I would be willing to contribute some of my paintings to a new falconry book, and he further explained that the book was not a ‘how-to book,’ but one with new approaches to the sport of falconry, along with some ideas not yet published, I agreed at once. I know my decision was right and I’m very honored to have contributed to such a book. I feel this new falconry book is needed by every falconer.”

Bern Poppelmann, born in 1946, lives in Steinfurt, Germany. His work in a variety of different media is best known for anatomically correct wildlife paintings characterized by intimate individualism. A true nature lover, he took lessons, not in an art classroom, but in the habitat of his untamed subjects. His depictions of wild birds are alive with spectacular detail and portray his deep knowledge and respect for his feathered friends. All of his animal pictures are bringing out the individual, showing the viewer not only their unique personality but also the essence of their being, as creatures of the wild. The allure, of his graphic and almost tactile reproductions, is to be drawn into a lively scene of nature, not just a still but a photographic document. His detail oriented precision illustrates the fragile beauty of wildlife in our modern world. Poppelmann’s mission to promote wildlife habitat preservation to the best of his talent is at the heart of his lifelong commitment to nature. His work has been exhibited worldwide.

“Ed has articulately described his views on flying a falcon in a manner which compliments the nature of the bird and allows the innate talents to be expressed in the various aspects of the relationship.“

Daryl Peterson grew up on a ranch in a remote area of American West, where a nesting pair of Golden Eagles and an intense interest in birds led him to discover falconry at an early age. A few years later he met Gerald Richards who became a close older friend and mentor. Ed Pitcher and Ricardo were mutual friends of Gerald and Daryl became captivated by the high-flying falcons. He has enjoyed drawing and painting birds since he was a youngster and has been published in North American Falconry and American Falconry magazine. Daryl now lives in Idaho, just down the valley from the Pitchers, with his beautiful wife, two boys and a daughter (named Anatum). He has continued his lifelong pursuit of falconry and currently flies peregrines and a golden eagle. He has had the pleasure of flying falcons for many years with Ed and seeing his ideas and thoughts on falcons finally collected and now put in to print.